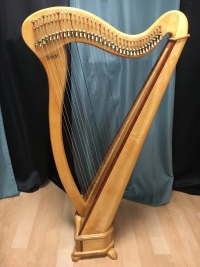 Aoyama Harp is a Japanese manufacturer of pedal (concert) harps and folk (lever) harps. Originally founded as the Aoyama Musical Instrument Manufacturing Company by Jitarō Aoyama in 1897 in Fukui, later generations of the family began the commercial manufacture of folk harps in the 1960s. The manufacture of pedal harps was begun by Kenzo Aoyama, the present head of the company. He began the productions of Grand Concert Harps.  The Aoyama harp factory, which was finished in 1992, includes a museum of antique harps as well as a concert  hall.

Please note that shipping is NOT included and will be calculated once we have the destination address.

View the embedded image gallery online at:
https://pacificatlanticharps.com/index.php/harps/used-harps/item/209-aoyama-lever-harp#sigProId38c69dde82
back to top