Harps made by Camac are like all harps in that they are made of wood, hand crafted by skilled artisans, the strings are made of nylon for the first octave, gut for the 2nd through 5th and bass wires. They have a standard pedal mechanism that operates the key changing disks. But there are a few differences that make the harps more user friendly from the harpists to the technicians that work on them for maintenance.

The first difference to notice is the weight of the concert pedal harps, which is considerably less than other manufacturers. This is because the non-resonating parts of the harp are made of carbon fiber with a wooden veneer instead of solid wood. The column is where the carbon fiber is used. This not only lightens the harp, but makes it structurally stronger resulting in a longer lasting harp and more stable tuning. The other weight reducing material is the alloy that the neck plates are made of, and the pedals. Rather than brass, a bronzed alloy is used, which does not tarnish.

The other big innovation is that instead of pedal rods, there are cables inside the column of the harp. There are a few advantages to the cables, the biggest being that they do not break. They are very strong, yet flexible, so they can weather the push-pull of the pedal movements. Unlike the rod mechanism which only has springs at the bottom of the rods, the cables have another set of springs at the top of the cables which pull the cables up as the pedal below raises into the natural and flat positions. The cables do not need to bend, and so they do not get fatigued and break. Another advantage of the cables is the lighter weight over the rods, which adds to the overall weight reduction.

Comfortable in the Top Octaves

The strings in the top octave are slightly fanned so that the hand position does not have to change so much when playing up high, and there is more space for the hand to fit between the soundboard and the neck in the top range of the harp. It takes only a short time for a player used to the spacing of harps made by other manufacturers to adjust to this difference, as it is ultimately more comfortable. 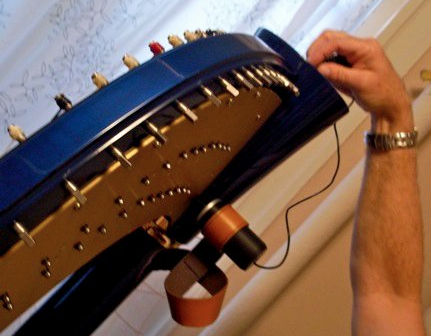 Camac pedal harps come with a tool kit which enables anyone to do regulations. There is a battery operated rod that slips into a hole at the crown of the harp, with a cord that connects to the top of the harp. When this is in place and the harp is in the sharp position, a small movement of the pedals (one at a time) will determine if the length of the cable is exactly right for the mechanism to change key in tune or not. If the rod device beeps then the cable is too long. Using the tool from the tool kit the harpist can turn the cable from the bottom of the harp until it is the right length. When the beep stops it is the right length. Detailed instructions are in the manual that comes with the tool kit. It is a very simple and very easy adjustment to make that can save the harpist from tuning issues and buzzes without having to wait for a technician to be available.

Many years ago Jakez decided to do an experiment. He put a brand new harp, fully strung, in the corner of his office. He measured it in all directions and 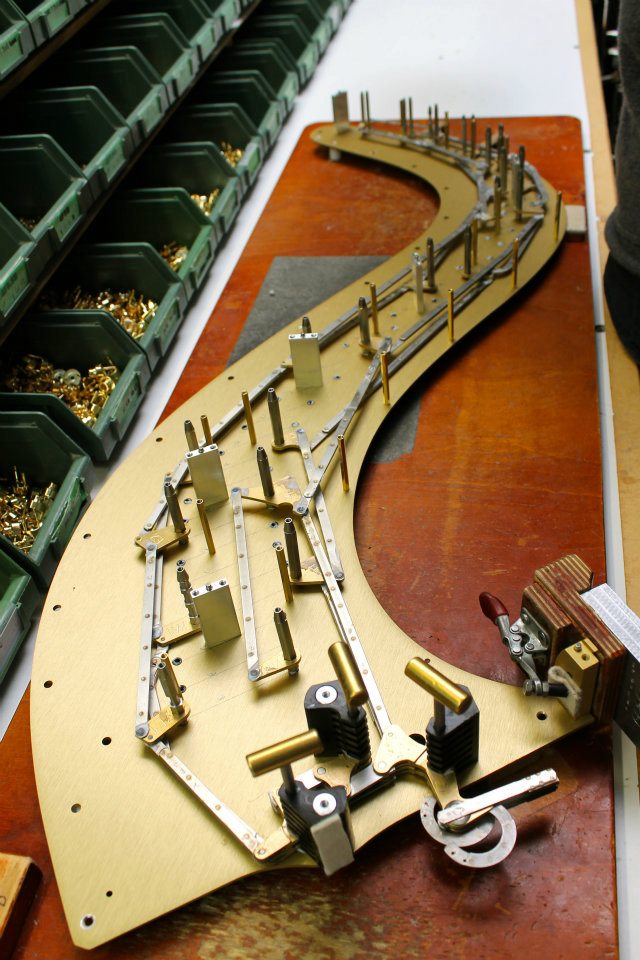 noted the exact dimensions. For a year he tuned the harp every week. At the end of the year he re measured the harp, and found that it had shifted a great deal. We all know that in the first year of life the harps shift a lot and need to be regulated. What we may not realize is that after this initial shift, the mechanism positions will never be exactly where they should be in order to create accurate half steps. So from the beginning of the 2nd year for the rest of the life of the harp it cannot be accurately regulated again. Only compromise is possible. After this second set of measurements Jakez redesigned the positioning of the mechanism, as well as the mechanism itself. It is now installed in the position that will be accurate for creating the half steps from the 2nd year onwards. In order for the first year to be accurate the mechanism is adjusted in a special way. After the first year the regulator will re adjust the disks into their life long position, and the result is a lifetime of accurate tuning.

The other detail about regulation and tuning stability is that instead of having felts wrapping the pedals, which compress very quickly and put your regulation out of tune, Camac harps have carbon fiber sleeves. These sleeves last a long time and don’t compress or scrape easily, so they rarely need to be replaced. The pedal notches themselves are on a slight angle with rounded edges to make pedaling easier and smoother, and to reduce wear on the sleeves. 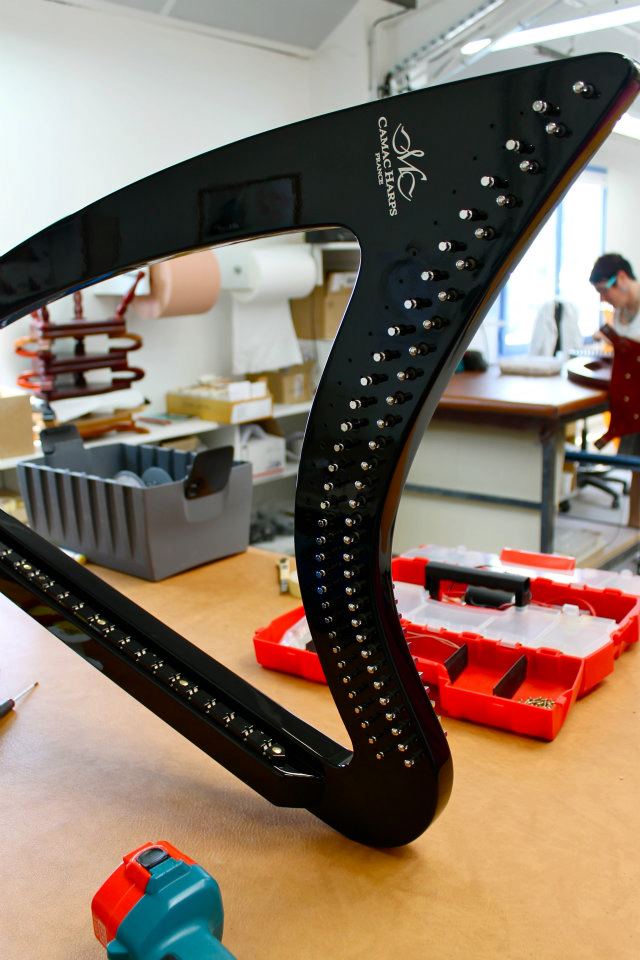 • The pedal rods do not break; they have been replaced by cables

• Top octaves are more comfortable to play in

• User can regulate the harp themselves

• Regulations is more accurate and stable